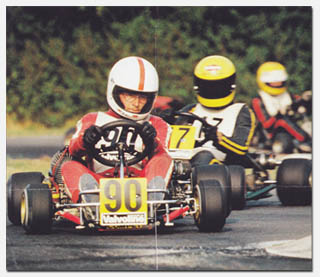 The man behind P.D.B. Racing Team is  Peter de Bruijn. Peter started racing go-karts when he was 11. His father Jan had a strong passion for motor racing, and in 1967 took young Peter to the Grand Prix circuit of Zandvoort, where they saw Jim Clark winning. Jan encounter with Ruud Hoffman, who had a homemade chassis poweredby West Bend 100cc engine, was a turning point. He bought the chassis for Peter, but before he could try it out, the chassis needed to be serviced, and this is when Peter started to put his hands on a kart. Peter soon got more interested in chassis set-up, expanding his interest to engines at the age of 12. Peter’s talent in setting up the equipment soon raised the interest of other drivers. In 1972, Leo van Calcar from Rotterdam, former 100cc ICA Dutch Champion, saw Peter’s great potential and decided to help him with his engines his driving skills. Despite of his lack of experience, Peter’s improved driving technique soon paid off. At the World Junior Championship in Vojens (DK) in 1972, Peter just missed a podium finish, forced to retire when the sparkplug cap fell off. The following year, at the World Junior Championship in Oldenzaal (NL), Peter was second behind Alain Prost, when bad luck stroke again: his carburettor spindle broke, ending Peter’s dreams of glory.
In 1974, beside his own racing activities, Peter worked as mechanic for Aad van Daalen, winning the 125cc gearbox European Championship in Niederkruchten (D) with their own tuned and prepared Yamaha engine. The following year, de Bruijn won the Dutch Championship with his homemade “Bruno” chassis and Komet engines, starting his long list of victories. At the end of the same year, he took up an offer from Holland based Landia karts to race for them, with Kees van den Grint as his mechanic. Peter and Kees collaboration paid off, as they won the Dutch Championship in 1976, 1977, and 1978 on his own chassis, the Concorde. His results didn’t go unnoticed: Dieter Vokinger, owner of Swiss Hutless, offered him to race for his team, and de Bruijn rewarded Vokinger’s trust by finishing 4th at the World Championship in Le Mans (F), and 3rd in the Hong Kong Grand Prix. In 1979, Peter raced karts as well as Formula Ford 1600, where he took 2nd at his debut and a win. In the World Karting Championship in Estoril, while leading in the final, his chain broke with four laps to go. This gave him the motivation to continue racing karts, preferring it to single-seaters.
He succeeded in winning the World Championship in Nivelles (B) in 1980, ahead of future F1 World Champion Ayrton Senna, helped by engine tuner Roland Marechal and Kees van den Grint. Peter’s stroke of wins carried on in 1981, with the European ICA Championship title; in 1982, with the European Championship FK-135cc title; and in 1983, as World Junior Champion Frank Eglem’s mechanic.
Peter ended his career as driver in 1988, to concentrate solely on the technical side. He continued working as team manager for Swiss Hutless, and in 1989 his driver Jos Verstappen (NL) won the European Championship in both FA and ICA categories, and the Japan Grand Prix.
The following year, Peter won again the European FA Championship, this time with Martijn Koene. In 1991, Lotta Hellberg (S) came into Peter’s team and life. Using Swiss Hutless chassis and Peter’s Rotax engines, she took an outstanding 4th position in the World FK Championship at Le Mans, unprecedented result for a lady driver. Then, in 1992 the big break: in fact, after winning the World Championship with Danilo Rossi (on Crg chassis and Rotax engines prepared by Peter), he made an agreement with Crg to be their “in house” tuner, marking the end of his collaboration with Swiss Hutless. 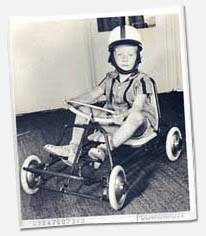 In each race, Peter took care of up to 80 engines used by Crg team. In 1995, Crg and Peter started a new project, the development of Crg own engines, now known as Maxter. During the first year, little progress was made, but results soon followed with Alessandro Manetti, who won the Australian Grand Prix and the Margutti Trophy in Parma in 1996. It was not only Manetti performing well, also Lotta and Giorgio Pantano showed great speed at the Margutti finishing 3rd and 5th respectively, and winning the European Championship round in Lonato (I) in their respective class. The same year, Manetti went very close to winning the World FSA title, but he was pushed off in the very last lap, still managing to finish third.